With the summer season upon us, mushroomers everywhere are dusting off their field guides.  Mushroom identification can often be tricky business, and for many of us a field guide is our first intro to the skill.  Figuring out which field guide to start with depends on a number of factors, including:

1) Where you’ll be hunting.  Region is important, but also habitat.   If you do most of your hunting in, for instance, the Jersey Pine Barrens, you can get away with a mid-atlantic guide, but a guide focusing on coastal pine forests of the eastern seaboard may include even more of the mushrooms you are likely to encounter.  “Where” also describes “when.”  Peak chanterelle season on the east coast is summer while in the west it’s winter.

2) What mushrooms you’re interested in.  Perhaps you’re only interested in edible varieties.  That narrows the search down a lot. Maybe after a season of hunting you figure out that you’re most interested in boletes.  Even a field guide focused on the genera that comprise the boletes will leave some out because simply put, there are too many mushrooms to fit into one book.

3) How familiar you are with mushroom hunting methods.  While simply looking around the woods can sometimes yield great treasures, knowing the what, when, how of mushroom hunting is what makes it a lasting, fruitful hobby.  Tree species (oak vs. maple, white oak vs red), microclimates (south vs north facing slopes),  hydrology (flood plain, drainage) and indicator species (cup fungi appear around the same time that morels start to pop up) are all things to keep in mind.  Understanding the behavior of a species can be helpful too.  If you find one morel in an area, there’s a decent chance that if you stay still and scan the area, you will find more.  A good beginner mushroom book will include descriptions of some of these skills– or at least they should.  Over time, a hunter will instinctualize these things.  Finding the mushrooms you’re looking for is a behaviorally-rewarding experience that tends to bind environmental cues into memory.  You can’t just learn these things in a book, but a book can set you on the right path.

3) How much detail you’re looking for.  When you’re on a foray with experienced identifiers, they will often have thick booklets of textual keys.  Keys provide a bounty of information on each species and go into great detail.  A particularly meticulous russula expert once showed me hundreds of pages of color charts corresponding to cap and stem color within a single genus.  Distinguishing barely-perceptible variations in hue would make me and any other amateur identifier go crazy.  Leave it to the hardcore nerds.  Don’t be afraid of going for the field guide with the pretty pictures…

…Scratch that.  Be afraid.

.  Just 12 years ago when I got my first guide, Gary Lincoff’s Audobon Field Guide was the only on the shelf.  A solid field guide that I’d recommend for a beginner, but I yearned for variety.   Recently, I checked out the nature section at Barnes and Noble and to my surprise there were a number of mushroom books and field guides.  I spent a few minutes checking out the covers and flipping the pages and in that short time I noticed two errors.

Now I don’t like being the tattle tale, but I when it comes to ID’ing mushrooms I feel it’s warranted. 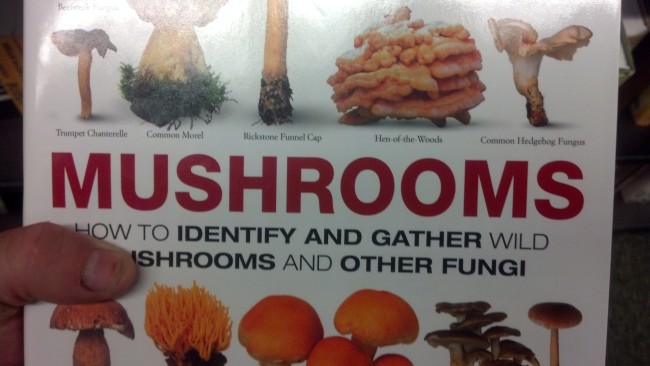 The cover of this field guide features a chicken of the woods but if you look at the text, it says “hen of the woods.”  While this may not be the most dangerous mix-up, it suggests a lack of scrutiny on the part of the editors that doesn’t bode well for the rest of the book. Also, it should be noted that chickens growing on locust and yew can possibly uptake toxins from those trees.  Hens aren’t known to grow on any toxic trees 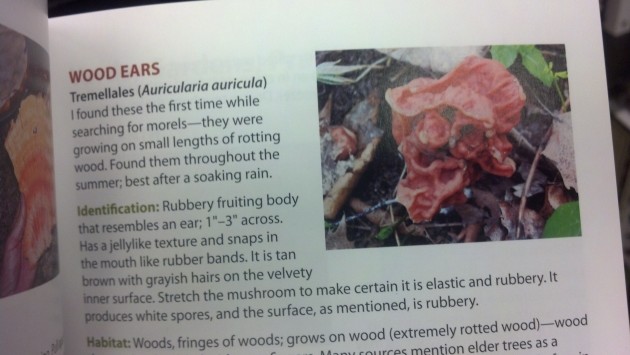 The Falcon Guide to Edible Wild Plants and Useful Herbs made a more serious mistake.  The text, though curiously anecdotal, isn’t totally off.  It would have been helpful to mention that tree ears– those crunchy mushrooms you often find in hot and sour soup– can thin the blood.  The real issue is with the photo, which isn’t of a tree ear but a species of the genus gyromitra, the false morels.    In some parts of the country and the world, people do venture to consume false morels after careful preparation, but the genus has also been responsible for deaths due to the presence of gyromitrin which converts into hydrazine (MMH).  Hydrazine, a volatile toxin and carcinogen best known as a form of rocket fuel, should be presumed present in all raw mushrooms.  That’s one good reason to cook mushrooms.  The levels in some false morels can be so high that cooking them can release toxic levels of hydrazine into the air.

It’s a tragedy to die from eating poisonous mushrooms.  It’s an even greater tragedy when you die from fumes even before you get a taste.  All because of a lousy picture.

So if you get a field guide, make sure it was written and edited by a mycologist.  Steer clear of new guides published in response to the growing popularity of mushrooms, especially those that cover plants and mushrooms together or include more anecdotes than factual details in the text.  Ask your local mycological association to help make a recommendation based on the above factors.  And when you take it for a spin, use the descriptions to make 100% confirmation.  If you plan to dine on your finds, 99% can land you in the hospital or worse.

Some final thoughts on mushroom hunting using a guide.  Mushrooms, unlike plants, can be extremely variable.  The type of substrate, volume of substrate, temperature, light, age and even the strain itself all influence the appearance of a mushroom, and that appearance can range considerably.  Two mushrooms of completely different genus can look more alike than two mushrooms of the same species.  Use all the senses necessary to make an ID.  I find that smell is extremely useful.  Smells can be difficult to describe, but the mammalian brain has been filing olfactory signatures deep within the brain for millions of years so sniff freely and often.

My #1 tip:  don’t expect anything.  Unless you’re a professional forager whose income relies on finding something, look at a day spent in the woods with no mushrooms to show for it as a day spent observing and interacting with nature.  Well worth it.  And you also learned something about “when not” and “where not” that you can file away for future foraging decisions.

Happy hunting.  Black trumpets and cinnabar chanterelles are up in eastern PA.