There’s a mysterious killer on the prowl in Rancocas.  She mummifies her victim and uses the body as a platform to display her lethal sexuality.

The unfortunate victim in this case was a carpenter bee.  And the killer is a fungus in the genus Cordyceps.  In a heroic act of altruism in the name of the Queen, the afflicted insect burrowed it’s way into the ligneous core of a fallen oak until it could go no further.  One can imagine its final moments: starved of oxygen and in a state of utter confusion as the carniverous hyphae dissolved its nervous system.  The heroic act paid off- the Cordyceps had succeeded in producing fruiting bodies but the spores, which would have threatened the entire colony, had nowhere to go.

That is, until a nosy mammal spotted the corpse and put it in his bag…

Cordyceps mushrooms, most notably Cordyceps Sinensis, the ‘caterpillar mushroom’ which grows 3 miles above sea level in the Himalayas, are prized for their affect on physical stamina.  More on this in this previous post. 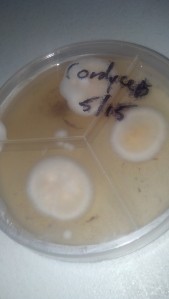 I took the corpse home with me and dismembered it in front of the flow hood.  The mycelium cloned readily on agar, starting out pure white then turning creamsicle-orange.  To my surprise, satellite colonies started popping up away from the main mat.  This probably indicates that the mycelium has the unique advantage of forming aerial hyphae which are carried away in the wind in hopes of landing on a new host.  Chicken mushroom mycelium also has this advantage, and this may explain why chicken mushroom mycelium is so common in oak forests.

After a week, I transferred an agar wedge to rye grain.  In three days, the jar was completely colonized!  When something colonizes that quickly, the first thought is contaminant mold, but after another five days there was no sign of mold spores.

I’m curious what species this is.  My first guess, based on the color of the mycelium and the fact that it is known in the Eastern U.S. would be C. militaris (which contains some of the same compounds found in C. sinensis).  However, I found no mention of militaris fruiting from a bee.  Also, the fruit bodies from the Rancocas specimen were small, flattened and more white than the familiar militaris fruits.  Perhaps the compressed, anaerobic nature of their growing environment explains their unusual appearance.  Or, maybe it’s another species, even a new species.  How cool would that be!  C. mycopolitanus (this will make more sense in subsequent posts)

Good things happening in the human-mycelial matrix.  Stay tuned, and thanks for reading!